The Diary Of A Rolling Stone

I went to watch Lipstick Under My Burkha (LUMB)

Before I tell you what the movie is about I would like to share my experience of going out to watch this movie.

Ten years into marriage now and I have skipped all the movies I ever wanted to watch on the silver screen. The reason is not different than many of yours. I love to watch off beat movies mostly and that does not pull in family viewing at all especially when you have kids in the house. So in theaters, I always end by watching movies which are treat to eyes of the kids which implies superman, flying Jatt etc. While I usually watch my TBV list on TV with CDs – pirated most of the time.

LUMB was a big change from all these things in my life. I boldly announced to my family that I am going to watch this movie in the theaters. Period! They glared at me for a while but then set me free. Yes FREE. I could go out watch my movie now. No baggage attached. No hard feelings like how could I do this to my family-taking the liberty and all. But you heard me correct. LUMB trailers got me to say that and with no baggage attached.

So now the first hurdle was crossed. which meant I had to watch it alone if my family was not coming along. ALONE! Nah. I turned to all my girlfriends on my phone contact list. Sending messages in Watsapp groups to make a team to go out to watch the movie in the hall.

Surprisingly, even after so much hoopla many of the women on my list had never heard of the movie. And those who did had some kind of excuse or the other to skip it. However, they did assure they would love to watch it. However, I know the situation would have been different if it was a different movie like romance or masala bollywood films.

LUMB is based on a social issue  and it is not just off beat but related to of woman’s sexual desire. It is a dark comedy. Nevertheless, I kept asking them out. So finally after pitching around thirty or so ladies in my groups, three finally came forward.

It was a rocking day for me and I gladly announced to my family that finally I got my movie mates. Venue and time of the show was decided. But on the due date, two of the three friends gave the same excuse which the others had given before. I can understand that.

Even saying about it to someone who had seen the trailers that you were going to watch it raised brows with a naughty smile. However, the film is anything but naughty.

I was wondering if I had to watch it alone again. I did that once many years before my marriage and was in for a shock after sitting in the theater. It was Amir khan movie – 1947, The Earth. (Very difficult to watch alone because of its rawness in portraying the incidents during partition of India ). So I was caught up in the same fear even after so many years. Of course both the movies are totally different. However, the thought of having a stranger sitting next to me in a darken hall was still very uncomfortable for me.

I reached the venue in time and was very glad to find the friend waiting. We watched the movie together and enjoyed it too. By the time it was over, it was late in the evening and drizzling too. We exchanged goodbyes and headed back home. She with her family and I in my scooty. Driving past the convoy of trucks on the national highway with beads of rain drops splashing on my face and wetting my clothes. Luckily there was no street light on at that moment- I want to remember LUMB for giving me those moments – my moment of lipstick wale sapne.

My Review of the movie: I loved the movie. Especially, the character played by Ratna Pathak – a middle aged widow dreaming of love life. Of course, the movie has lots of other relatable characters too, chasing their dreams. Even when their dreams comes crashing down instead of losing hope they chase a new one. Never stop dreaming it says. For nobody can take that away from you – Your Lipstick Wale Sapne

“If you don’t fit in with your peers, you get depressed” – Sudesna Ghosh, author of Just Me, the Sink and The Pot.

Today we have with us of our blog guest post author Sudesna Ghosh (Sue) a writer based in Kolkata. She was born in the United States and moved to India when she was 9. After completing high school there, she went back to the US for her higher education at the University of Rochester. She has also penned What Would I Tell Her @ 13 and News Now, along with several short stories. When Sudesna isn’t writing, she tries to do her bit for animal welfare.

Her recent release Just Me, The Sink and The Pot is a children and Young adult literature targeting the theme of body shaming in kids.

Your book talks about teenager issue of getting stressed because of physical appearance. How does it affect the overall self-esteem of the child in the near future?

Body shaming and body image issues effect people of all ages. It is one thing to dislike a thing or two about your appearance, and entirely a different thing to be obsessed with disliking your body and its imperfections. These imperfections of course come from society’s definition of beauty.

When a child grows up knowing and being told repeatedly that she is ‘different’ and that she doesn’t meet the standards of beauty, the child can do either of two things – learn to ignore it and maybe even laugh it off, or believe everyone else and develop low self esteem. The latter happens often and coming out of it isn’t easy unless you have a LOT of support. Support from parents, from teachers, from mental health professionals, is necessary to survive in the battle against negative body image.

Children, especially teens, are in a phase of life where fitting in is important. If you don’t fit in with your peers, you get depressed and dislike yourself for being different. The bad news is that there will be bullies who make other kids feel terrible about the way they look. Yet there is good news too; we as a society are speaking up about mental health issues in India. While depression and anxiety can result due to multiple reasons, I believe that even children/teens are getting professional help these days if needed and of course, if the adults in their lives are perceptive enough.

Growing up with body image issues has taught me one thing better late than never: there are overweight girls and women everywhere but everyone has a different level of self confidence. Confidence takes time to build and is easier to have no matter your weight as you grow older and realise what is really important to you and your life. Children are just starting out, learning about the world and trying to make themselves be liked – low self esteem can develop and should not be ignored.

JUST ME, THE SINK & THE POT
by
Sudesna Ghosh 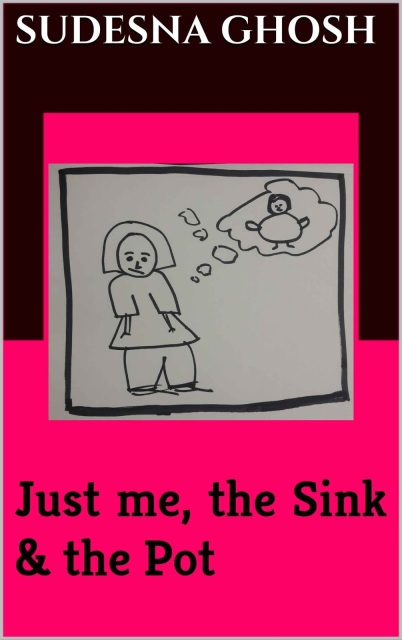 Blurb
Meet Pamela, an overweight girl who’s looking back at her school days. From longing for a Valentine to dealing with a sibling who hates her, Pamela has a lot to deal with. She even has a special bunch of friends at home who she can turn to – but they aren’t the kind of friends you’d expect. Life sucks when you’re fat. Can Pamela ever be happy?
Read an excerpt of the book here…
One day a classmate asked me, “Where is your lunch?” I told her that I had already had it and went back to my fake laughter and smiles. The others chatted and laughed while they ate from their tiffin boxes. Some brought samosas or ice cream from outside the gate. My hunger pangs got worse as I saw all the food and smelt the delicious odours around me.
The ice cream cart was run by a sweet old man who knew me since I’d started school. He would ask me some days, “Child, you don’t want your favourite orange stick?” I would say no thank you and smile before running away from him and his cart. One day he seemed to be desperate to make me have an ice cream. “Child! Come here and have an ice cream. You don’t have to pay me,” he called out. I smiled, turned around and went to hide in an empty classroom. Two minutes later, I shrieked; the old man had found me. He was carrying a dripping ice cream for me. I started laughing. Then I started running away from him. The old man started running after me!
My classmates were shocked. The sports teacher was happy to see me run for the first time – I had never run before because fat moves when you run. Everybody would laugh. The lunch break ended with me accepting the mostly melted orange stick from the kind ice cream man. We were too tired to talk about the whole event. But it did make me a bit popular that year, with the school Yearbook including the story and a picture of me running away from a 6 feet tall man holding an ice cream.

This Tour is Hosted by

Scripting the story of life

Things are as they are, not as they should be!

...and then there was Sarah